A black-owned automobile shop had been targeted for weeks by vandals leaving racist graffiti but the owner was surprised to find out the suspects were also black after he set up surveillance cameras.

Haynesworth told WRAL that he was confused by the racist images left on cars by vandals over several weeks.

“I mean I’m not bothering anybody. I’m just out here trying to do business. I don’t really know anybody out here,” he said.

The spray painted swastikas and KKK figures on his cars and left the message, “please leave.” They also damaged several vehicles. The owner said that the vandalism started after one of his vehicles was stolen from the lot he rents.

Haynesworth then set up surveillance cameras to capture images of the vandals.

The video showed two young males who appear to be black trying to steal one of Haynesworth’s cars. The shop owner says there was more damage done to his vehicles, including paint scratches and windows broken.

One clue that might have tipped off the police to the incident being not a legitimate instance of white supremacy was that the swastika had one of the arms painted backwards. 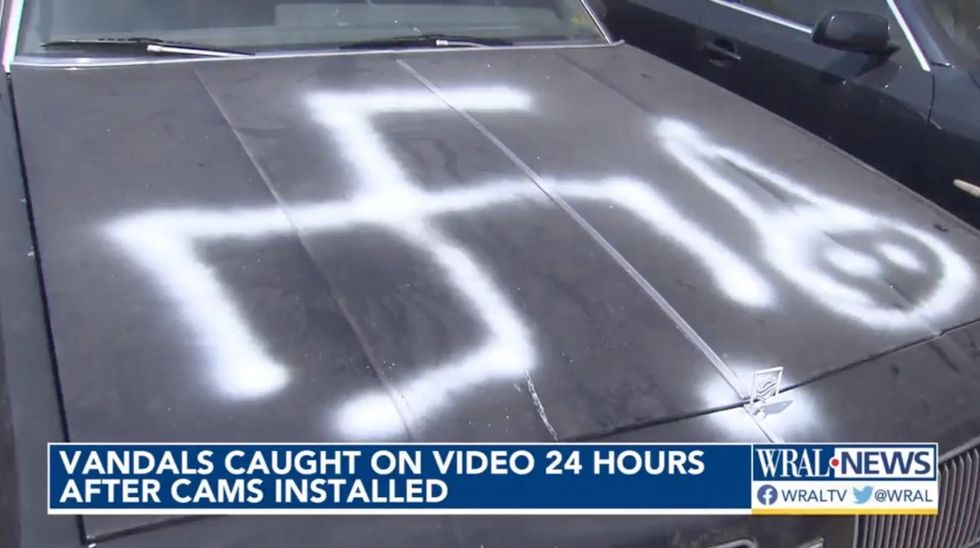 Baez noted that the suspects appeared to be smoking a “blunt” on the video captured of them, and added that police didn’t take any fingerprints at the scene of the crime.

The Spring Lake Police Department posted screenshots from the surveillance video on their Facebook page and asked for the public’s help in identifying the suspects.

Here’s the local news video about the incident: