Asian parent calls out Va. school board over wokeness in powerful speech — gets told to sit downMay 8, 2021 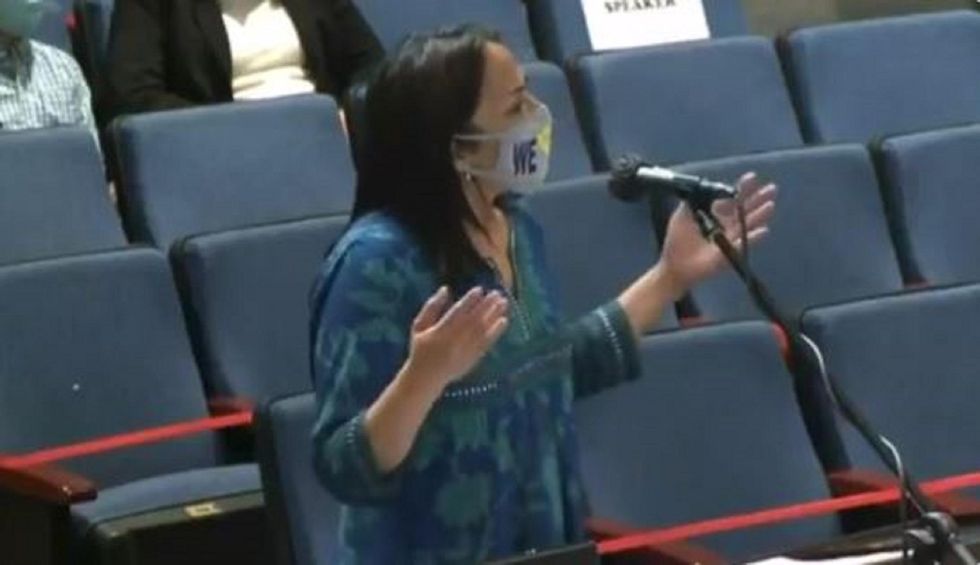 Former Wall Street Journal writer and Asian American immigrant Asra Nomani delivered a moving speech before the Virginia school board overseeing her son’s education, lambasting officials for their “anti-racism” propaganda push before she was cut off and told: “Go to your seat.”

Nomani, who is now vice president of anti-indoctrination group Parents Defending Education, addressed the Fairfax County Public Schools board by reminding them, “I came before you in June 2020. I spoke to you during quarantine. I pled with you at that time, because I said to you that we had activists from Thomas Jefferson High School for Science and Technology — where my son is a senior — and that they had just debated the idea of an ‘occupy TJ movement.'”

“I sent a note to every single one of you, and I got not a single response,” she continued. “There was no concern about our students at that time. And then, the summer proceeded, and the principal at our high school told us that our mostly minority students and parents had to ‘check their privileges.'”

Nomani then began calling out officials by name and to their faces, individually.

“[Superintendent] Dr. [Scott] Brabrand, you decided that our students and our families were spending thousands and thousands of dollars on test prep,” she said, before turning to another official. “And then you, Melanie Meren, told us that we were ‘toxic.'”

The mother didn’t quit there. She continued, “And then, Karen Keys-Gamarra promoted the idea that we were racist. And then by the fall, every single one of you voted to remove the merit-based race-blind admissions test to TJ. And we pled with you, as Asians, as an immigrant, (I came at the age of 4, I knew no English), and you didn’t listen to us.”

She went on to say, “And now I sit hear listening to these empty proclamations and declarations you’re making about your great value of Asian-Americans.”

Nomani then criticized the board over a recent survey they sent parents via a partnership with The Leadership Academy, which the board has purportedly already paid nearly $50,000 to help promote “equity-focused leadership development” and “anti-racism,” National Review reported.

But then a buzzer rang, signifying that Nomani’s speaking time was up. An official immediately began telling Nomani that her “time has expired,” and repeatedly calling for the “next speaker” before ultimately telling the mother: “Please, go to your seat.”

In sharing the video of her speech on social media, Nomani tweeted, “I spoke from my heart to the @fcpsnews school board. Watch board chair Ricardy Anderson rage at me. Didn’t she get the memo that watching the clock is ‘white supremacy’? She reveals the board’s true anti-Asian animus. @ricardy4Mason, YOUR time has expired.”

I spoke from my heart to the @fcpsnews school board. Watch board chair Ricardy Anderson rage at me. Didn’t she get… https://t.co/k5ACBU9qr4

National Review noted that the school board is currently “facing at least two lawsuits alleging anti-Asian discrimination.” The board did not immediately reply to the outlet’s request for comment on Nomani’s speech.