Twitter torches PBS journalist over her question on the border crisis to President Biden at first media briefingMarch 26, 2021 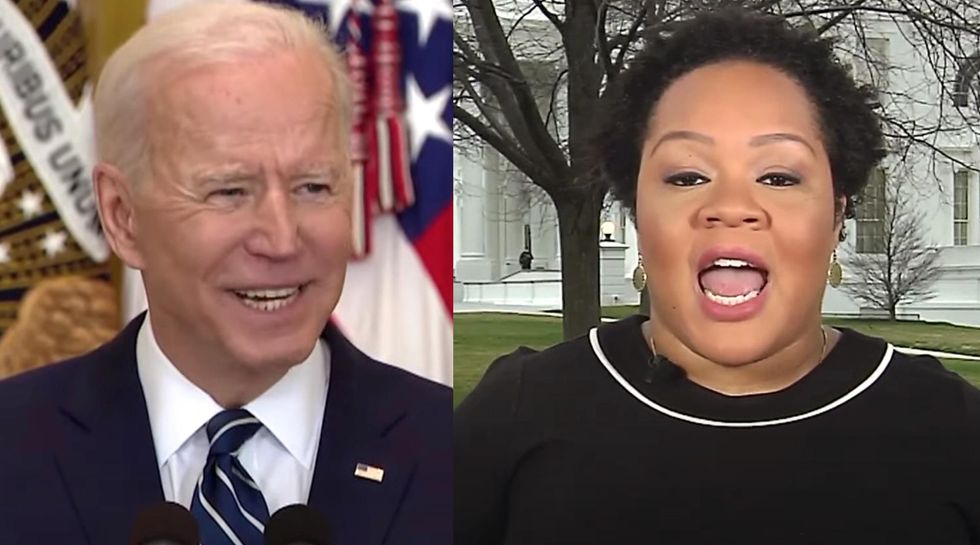 Yamiche Alcindor, the White House correspondent for PBS, faced a torrent of backlash after she tossed softball questions to President Joe Biden at the first official media briefing of his presidency Thursday.

Alcindor pressured Biden to allow more illegal immigrants into the country while telling him that migrants are coming to the border because of the perception that he was a “moral decent man” during the election.

“You said over and over again that immigrants shouldn’t come to this country, right now this isn’t the time to come. That message is not being received instead the perception of you that got you elected as a moral decent man is the reason why a lot of immigrants are coming to this country and entrusting you with unaccompanied minors,” said Alcindor.

“How do you resolve that tension, and how are choosing what families can stay and what families can go given the fact that even though with Title 42, there are some families that are staying,” she continued, “and is there a timeline for when we won’t be seeing these overcrowded facilities run by CPD when it comes to unaccompanied minors?”

Biden disagreed with Alcindor and claimed that the increases in child migrant crossings at the border were due to seasonal fluctuations.

“Well look I guess I should be flattered people are coming because I’m the nice guy, that’s the reason that it’s happening, that I’m a decent man or however it is phrased. That’s why they’re coming because they know Biden is a good guy,” he responded.

“The truth of the matter is, nothing has changed,” Biden claimed. “It happens every single solitary year.”

While the interaction was more combative than most recognized, many on Twitter pounced on Alcindor for saying Biden was elected because of the perception that he was a “moral decent” man.

“Fancy that! Reporter #2 @Yamiche was already standing up ready to ask her border question when Biden *randomly* called out her name. She tells him he is a ‘moral decent man’. He agrees, says people think he is a ‘good guy’,” tweeted Fox News contributor Miranda Devine.

“Biden just called on @Yamiche from his hand-picked list of reporters, who proceeded to ask one of the most embarrassing, partisan questions I’ve ever seen,” replied Caleb Hull to the exchange.

“Yamiche Alcindor is a partisan liar. She is a terrible person,” responded Ryan Saavedra of the Daily Wire.

Others complained because Alcindor’s question was premised on the claim that Biden’s statements encouraged more migration.

“Ugh. @Yamiche embraces the bulls*** narrative that migrants are coming because they think Biden’s a softy,” tweeted Dan Froomkin of Press Watch.

“Yamiche makes the statement unproven that his words set off the surge. This is factually wrong,” complained anti-Trump columnist Jen Rubin.

Alcindor was previously criticized on social media over what many saw as a tweet biased against a Republican member of Congress.


What we learned from Biden’s first presidential news conference

Trump left behind a clemency mess. The clock’s ticking for Biden to solve it.