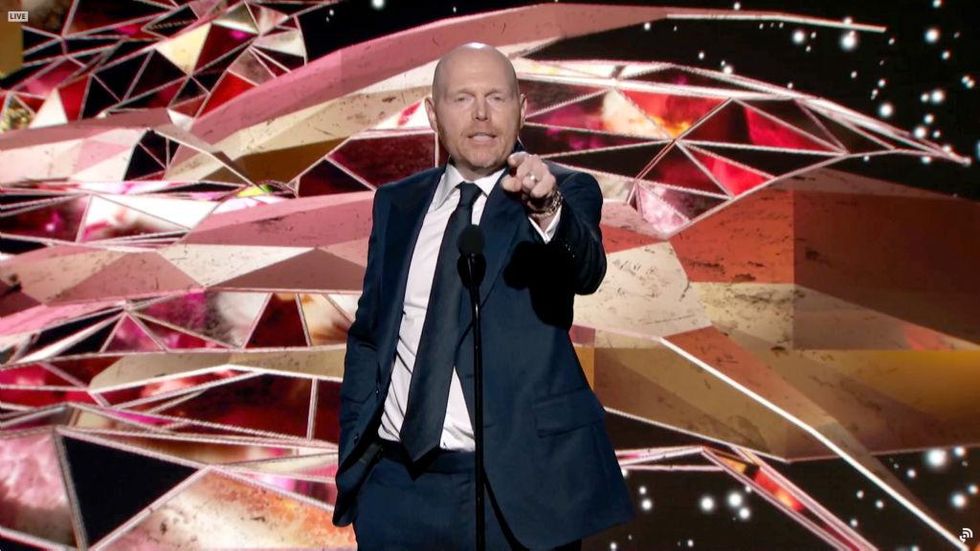 Bill Burr was a top trend on Twitter early Thursday evening, not for one of his many highly-rated comedy specials or his role as Migs Mayfeld in “The Mandalorian.” Instead, the stand-up comedy veteran was being assailed by the outrage mob, who were actively trying to cancel him for jokes he made during the 2021 Grammy Awards.

In an unusual move, the comedian presented the Grammy Award for “Best Regional Mexican Album,” which aired before the 63rd Annual Grammy Awards ceremony. Burr, who is never shy to tell the audience exactly what he is thinking, angered many people with his brash and unapologetic comedy style.

From the get-go, Burr set the tone that he was not going to be your typical Grammy’s Award presenter. The comedian joked, “Was I the only one who wanted to kill himself after that piano solo.”

Then he did some self-deprecating humor and called himself a “moron” for buying a new suit to present an award during the pre-Grammy’s show that was done remotely and nobody would see.

Bill Burr came out to present at the Grammys after a piano performance “Was I the only one who wanted to kill hims… https://t.co/kCRSWPTWm2

Bill Burr butchers women’s name and then is awkwardly forced to accept the award for her at the Grammys https://t.co/xp3143GY1J

While presenting the “Best Tropical Latin Album,” Burr made a joke about feminists. “How many feminists are like going nuts, ‘Why is this cis white male doing all this Latino stuff?'”

Bill Burr the GOAT Lolol
Rare comedian that will joke about stuff like this https://t.co/Aq5dzKva0E

The wisecrack mocking woke culture hit a nerve and unleashed hundreds of tweets demanding the comedian be canceled for saying a joke.

There were furious calls to “ban all white men” and “for all white men to be kept in cages.” Another commenter inexplicably said he was “making fun of civil rights movements.” One person said Burr doesn’t have a comedic bone in his body. Burr has six comedy specials and was a regular on “Chappelle’s Show.”

btw this is a bill burr hate tweet, mf can’t make a single joke without punching down and making fun of civil right… https://t.co/QRKsJ54i0Y

People who think being an offensive asshole on purpose is funny are the actual least humorous people alive like jus… https://t.co/ERKayUvYNk

Idk what he said but god I love bill burr https://t.co/SlyPhr74jx

Who decided Bill Burr was a good idea? Ugh.

The @RecordingAcad needs to own up to this failure of selecting Bill Burr as a presenter. What a terrible choice. H… https://t.co/lDxE3JAihy

If Bill Burr presenting these nominees isn’t an accurate representation of the Academy @ non white artists..

There were plenty of people defending Burr for telling jokes, and lampooning those who were said to be outraged over his comedy.

Bill Burr is a Rorschach test as to whether you have the slightest sense of humor or a huge stick up your ass. He’… https://t.co/qQ7Yy3YhOd

It’s the quarterly attempt at cancelling Bill Burr for being hilarious I see.

Bill Burr is trending so I’m assuming all the right people are mad about something.

I don’t know what #BillBurr said to piss marshmallows off, but I AGREE.

Bill Burr after being cancelled https://t.co/PYRLGharjO

One Twitter user shared a video clip from Burr talking to Bill Maher about cancel culture from a few years ago, where he dismissed his haters.

reminder that bill burr doesn’t give a fuck about the culture war bullshit between performatively “woke” liberals a… https://t.co/XIi7iBUX5i

Bill Burr also obliterated cancel culture when he hosted “Saturday Night Live” in 2019. The comedian also defended his fellow “The Mandalorian” star Gina Carano when she was canceled from the hit Disney show.

Confidence Interval: Will Marijuana Be Legal Everywhere In The U.S. By 2024?