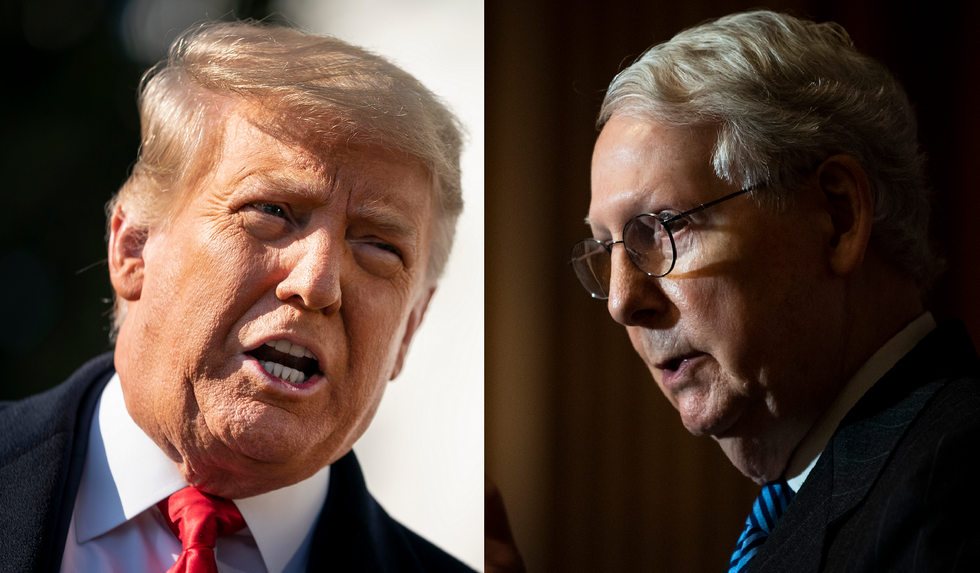 The Republican Party can never again be respected or strong with political “leaders” like Sen. Mitch McConnell at its helm. McConnell’s dedication to business as usual, status quo policies, together with his lack of political insight, wisdom, skill, and personality, has rapidly driven him from Majority Leader to Minority Leader, and it will only get worse. The Democrats and Chuck Schumer play McConnell like a fiddle—they’ve never had it so good—and they want to keep it that way! We know our America First agenda is a winner, not McConnell’s Beltway First agenda or Biden’s America Last.

After blaming McConnell for the GOP losing control of the Senate, the former president argued that “McConnell has no credibility on China because of his family’s substantial Chinese business holdings,” before saying of the minority leader, “Mitch is a dour, sullen, and unsmiling political hack, and if Republican Senators are going to stay with him, they will not win again.”

Trump’s statement comes after McConnell delivered two public condemnations of Trump for his actions surrounding the Jan. 6 attack on the U.S. Capitol by a mob of Trump supporters.

The Senate voted over the weekend to acquit Trump after the House impeached him on one charge of inciting an insurrection. Although McConnell himself voted to acquit citing constitutional grounds, he delivered a floor speech following the vote where he declared, “There’s no question — none — that President Trump is practically and morally responsible for provoking the events of [Jan. 6].”

McConnell went on to pen an op-ed for The Wall Street Journal where he defended his vote, but reiterated again that there is “no question former President Trump bears moral responsibility” for the Capitol siege.

However, McConnell attempted to leave the door open for Trump to continue to influence the party at least to some degree, telling The Journal in a separate story, “I’m not assuming that, to the extent the former president wants to continue to be involved, he won’t be a constructive part of the process.”

The finger pointing between Trump and McConnell comes as the GOP has experienced fracturing surrounding Trump’s second impeachment in a year, where Republican members in both the House and Senate joined Democrats in voting to convict the former president.

Trump has reportedly discussed the possibility of breaking away from the GOP to launch his own “MAGA” or “Patriot Party,” but made no mention of that in his statement. Instead, he signaled his intent to continue to influence the Republican Party, writing, “Where necessary and appropriate, I will back primary rivals who espouse Making America Great Again and our policy of America First. We want brilliant, strong, thoughtful, and compassionate leadership.”