Startling video at impeachment trial shows how close rioters got to Mitt Romney, and how a Capitol officer saved himFebruary 11, 2021 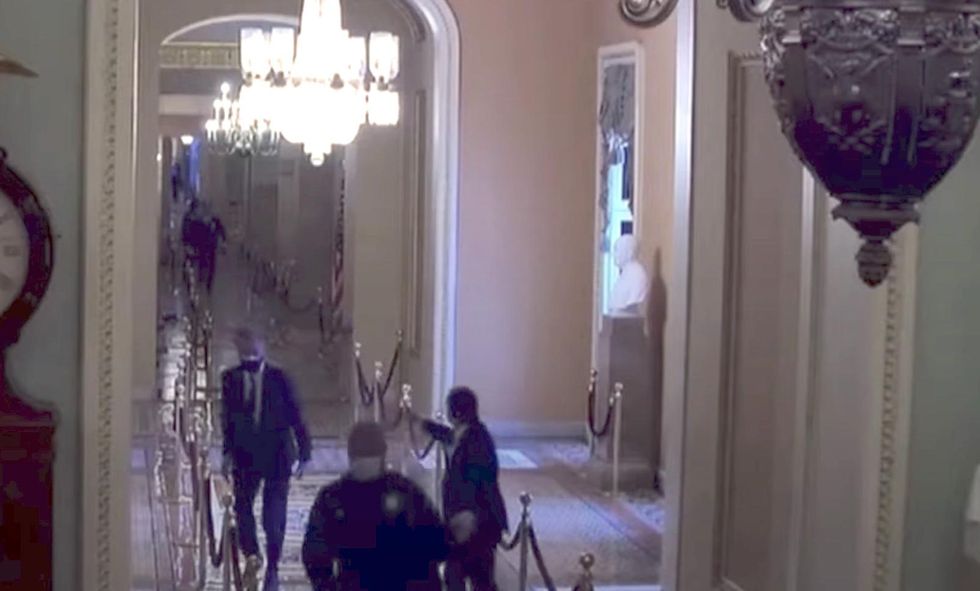 Stunning new video presented at the Senate impeachment trial for former President Donald Trump showed the moment that a Capitol Police officer sprinted towards Sen. Mitt Romney (R-Utah) and turned him away from the advancing rioters.

The Senate heard arguments on Wednesday to convict Trump on an article of impeachment accusing him of inciting an insurrection at the U.S. Capitol on Jan. 6.

The video showed Romney walking down a Capitol hallway as officer Eugene Goodman rushes towards him and warns him to turn back to safety.

Whoa: Eugene Goodman ran into Mitt Romney in the hallway and told him to turn around and get to safety, as the mob… https://t.co/G5RnLeew6i

“On the first floor, just beneath him, the mob had already started to search for the Senate chamber,” said Stacey Plaskett, the delegate to the House for the U.S. Virgin Islands, who narrated the events in the video for the trial.

“Officer Goodman made his way to the first floor, where he encountered the same insurrectionists we just saw breach the Capitol,” she continued.

The video then turned to footage of Goodman confronting the rioters and stalling them.

“In this video we can see the rioters surge toward officer Goodman,” Plaskett explains.

Goodman, an Iraqi War veteran, had already been hailed as a hero for his quick thinking in leading the rioters away from the Senate chambers. Viewers expressed even more praise for the officer after seeing that he had also saved Romney from what likely would have been a violent confrontation with rioters.

Among those were Romney, who told a reporter that he was seeking out Goodman to thank him, and said that it was incredibly emotional and distressing to see the new footage from the rioting.

Trump is unlikely to be convicted since the Constitution requires two thirds of the Senate to pass an impeachment conviction, and many Republicans have already vocalized their staunch opposition to the proceedings.

Here’s a longer video of the footage at the trial:

Oregon Democratic lawmaker says Portland riots are ‘not out of control,’ some people just have ‘strong feelings’