Marjorie Taylor Greene fumes as GOP leaders reportedly side with Democrats in push for her ouster from committeesFebruary 3, 2021 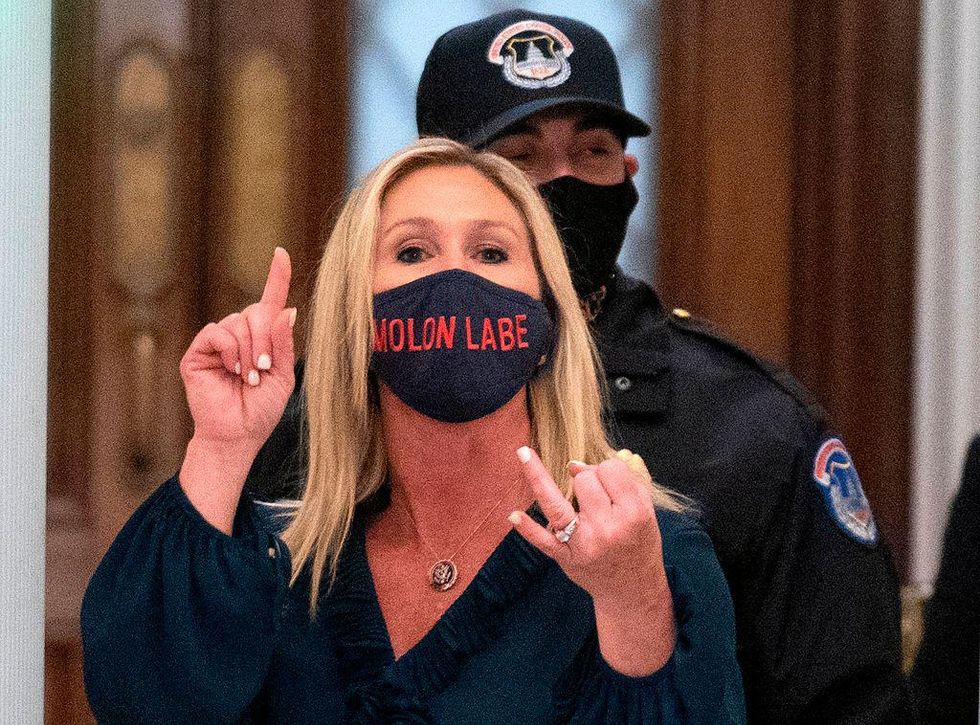 Newly elected Republican Rep. Marjorie Taylor Greene (Ga.) lashed out at “hate America Democrats” and their “bloodthirsty media” henchmen on Twitter Wednesday in response to a Democratic initiative to
oust her from committee assignments that had reportedly begun to resonate with Republican leadership.

Greene — who has drawn condemnation from Democrats, and some Republicans, over past controversial social media posts and alleged support for the QAnon conspiracy movement — maintained defiance in the face of attempts to diminish her influence in Congress.

News broke overnight that House Minority Leader Kevin McCarthy and Republican leadership were “leaning toward” acquiescing to Democratic demands and removing Greene from the House Education and Labor Committee unless she decided to step down on her own.

McCarthy reportedly approached Greene with the ultimatum during a late night meeting Tuesday, explaining to her that the situation was reaching a breaking point and that Democrats forcing a vote on her removal puts Republicans in a “bad spot.”

During a two-hour meeting Tuesday night with Greene, McCarthy explained to the QAnon supporter that her controversial past statements were coming to a head. The problem, McCarthy told her: Democrats are threatening to force a vote to remove her from her committees — and that puts the entire GOP Conference in a bad spot. McCarthy tried to give Greene options, according to a person familiar with their talk: She could denounce QAnon and apologize publicly for espousing hurtful conspiracy theories and endorsing violence on Democrats. She could remove herself from the panel to spare her colleagues a vote on the matter. Or, she could face removal from her own GOP peers.

The meeting, however, did not go the way McCarthy had hoped, Politico noted. Because shortly after, the GOP leader reportedly tried unsuccessfully to broker a deal with Democratic House Majority Leader Steny Hoyer (Md.) in which McCarthy offered to remove Greene from the Education and Labor committee if Democrats allowed her to remain on the Budget Committee.

Showing no signs of backing down, Greene took to Twitter Wednesday morning to excoriate Democratic lawmakers and members of the media for their attacks on her.

“No matter what [McCarthy] does it would never be enough for the hate America Democrats,” Greene blasted. “As much as he genuinely tries to work with [Democratic House Speaker Nancy Pelosi (Calif.)] for the good of this country, she refuses to see the hypocrisy of her own conference.”

The first term lawmaker then unleashed a tidal wave of insults at the Democratic Party.

“Filled with members who supported, cheered on, & funded criminal thugs who riot, burn, loot, attack police, murder, & occupy federal property,” she said of Democrats. “Members who sleep with our greatest enemy, marry their brother to get him in our country, lead a violent mob in neighborhoods, and more.”

“They are only set out to destroy Republicans, your jobs, our economy, your children’s education and lives, steal our freedoms, and erase God’s creation. And the bloodthirsty media are their henchmen who help them by relentlessly attacking anyone in their path,” she added.

We know who they all are.

We owe them no apologies

We will never back down.

We only serve the ONE who created… https://t.co/ZSvPpG8Mu6

“We know who they all are. We owe them no apologies. We will never back down,” Greene vowed.

After McCarthy failed to strike a compromise with Hoyer on Wednesday, Democrats set the House resolution vote on Greene’s removal from committee assignments for Thursday.

According to Politico reporter Heather Caygle, Hoyer said, “I spoke to Leader McCarthy this morning, and it is clear there is no alternative to holding a Floor vote on the resolution to remove Rep. Greene from her committee assignments.”

No deal between Hoyer and McCar… https://t.co/z27YaRny00

More Hoyer: “The Rules Committee will meet this afternoon, and the House will vote on the resolution tomorrow.”

More And More Americans Aren’t Religious. Why Are Democrats Ignoring These Voters?

Win or lose, Trump’s new GOP is here to stay

‘Being young’ leads to detention in China’s Xinjiang region