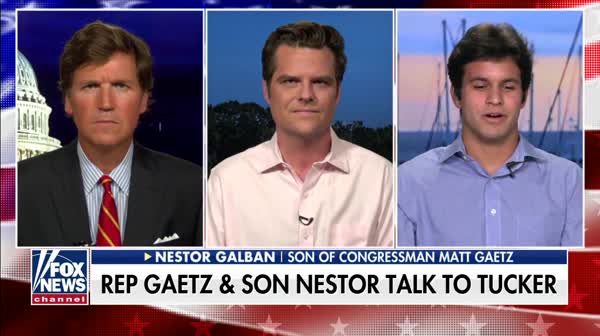 The story revolving around Rep. Gaetz is that he claims he has a Cuban son after he clashed with Rep. Cedric Richmond on Wednesday.

I think it’s great that Rep. Gaetz took guardianship over Nestor when he was 12, if that’s the case, but the steps that Gaetz took to hide that fact, and the timing of his “announcement,” is unsettling and raises more questions than it answers.

Why lie about his existence up until this week?

People Magazine is reporting that he isn’t actually Rep. Gaetz’s son: the two-term Republican congressman surprised many with his Thursday announcement that he’s a parent, though he hasn’t adopted 19-year-old Nestor: “Our family’s defined by love.”

Gaetz did not formally adopt Nestor (and he declines to discuss Nestor’s relationship with his biological family now). He re-frames the matter, saying, “Our relationship as a family is defined by our love for each other, not by any paperwork.”

Nestor, he says, “is my son in every conceivable way, and I can’t imagine loving him anymore if he was my own flesh and blood.”

The law and order Congressman cares not for the law anymore. What a shock.

Laws apply only to YOU.

The screaming match that the Florida Congressman had with Cedric Richmond revolved around Black males being assaulted by law enforcement.

And this was the touchstone of his big reveal.

Gaetz is like every other a-hole who says they aren’t racists because they’ve dated a Black girl or have a Black friend.

This appeared to be a set up for Rep. Gaetz and why he said “non-white” children to Rep. Richmond instead of Black.

Being Latino in Florida, which has a large Cuban population and huge political influence in the state, is not the same as driving while Black in Baltimore, or Minneapolis, or Atlanta.

Data compiled by CQ Roll Call — and previously confirmed by Gaetz’s office — did not list the congressman as having any children during his two terms so far in Congress or as a House candidate. As recently as July 2019, CQ Roll Call conducted biographical data checks, and Gaetz’s staff did not disclose Nestor Galban as his son when they were asked to confirm basic biographical information. Instead, his office confirmed that Gaetz was single with no children.

Why the ruse? There’s a lot of meme’s popping up on Twitter about this but you judge for yourself.

And if he hasn’t formally adopted Nestor then he’s not his son.

He’s not even his guardian.

That didn’t stop Fox News’ Tucker Carlson from heavily promoting the notion that Nester is indeed his son.

Fox News has a symbiotic relationship with Republican members of Congress: Fox props up Republican congressmen and their propaganda, and Republican Congressmen scream during congressional hearings to provide dramatic pro-GOP soundbites for Fox’s primetime lineup.

I think anyone who understands people can see that this whole “Matt Gaetz” scenario is not going to end well.

To give Matt Gaetz the benefit of the doubt, to take him at his word, is to understand that he engaged in the most egregious and shameful exploitation of his own family in the history of US politics.